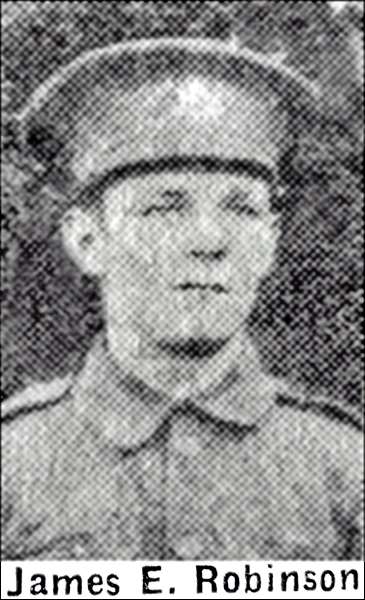 Commemorated on the Tipton Library, and St. Matthew's memorials.
Commemorated here because he appears on a Tipton memorial.

The 53rd Company, Machine Gun Corps, belonged to 53rd Brigade of 18th (Eastern) Division. For the Battle of Langemarck, 53rd Brigade was loaned to 56th Division on the right of the battlefield. 53rd Brigade was to advance from Stirling Castle, through Inverness Copse to Black Watch Corner at Polygon Wood. The attack did not go well, and the 53rd Brigade was forced to halt and create a defensive flank.

8 Machine Gun units were allocated the task of firing a barrage onto German lines; it is possible that James was involved in this. A letter from his officer says he was buried in Sanctuary Wood which is in this general area. James has no known gave and is commemorated on the Tyne Cot Memorial.

Tipton Herald September 29th 1917
ANOTHER TIPTON HERO.
Another young Tipton soldier to be killed in action is Private James Edwin Robinson, eldest son of Mr and Mrs James T. Robinson, 22 Factory Road, Tipton. He was one of the band of patriotic young heroes who, under military age at the outbreak of war, joined the forces in the wave of patriotism following upon the outbreak of war. He was age 17 when he enlisted in the month of October 1914. He was 20 years of age in February last, and so would have seen three years of army life. His parents have received no particulars of how their son lost his life, other than that he was killed in action. As a boy he attended the Five Ways Council School, and was a regular attendant at the Wesleyan Mission in Coppice Street, being the only scholar leaving school direct for the army. He joined the 2/6th South Staffs Regiment, and was in the Machine Gun Section. After leaving school, he worked at Bullers Ltd. up to the time of war. His father is employed at Willingsworth Furnaces. The parents have three younger children. Earlier in the campaign he sustained frozen feet, and from November 1915 to January 1916, he was in the Birmingham Hospital. He was then sent to Yorkshire from where he went straight to France. He had had no furlough since that time, so that his parents had not seen him for 21 months.
Writing to the parents, the Lieutenant of the Company says:- "I am sending you some of your son's belongings by parcel post. I know I have lost a jolly good fellow. Out here his behaviour on all occasions called for the highest praise from any officer with him at the time. His grave is in Sanctuary Wood, near Ypres, and he was buried with the respect that is only possible to give to those who fall out here. He was under me the whole of his time out here since last September. You have my sincere and deepest sympathy in your sad loss."
Note: James Robinson is commemorated on the Tyne Cot Memorial, so his grave in Sanctuary Wood was subsequently lost.
also
Roll of Honour.
ROBINSON.- Killed in action in France on August 17th 1917, Private James E. Robinson, 22 Factory Road, Tipton. Deeply cherished by his parents.