Commemorated on the Tipton Library Memorial.
Commemorated here because he appears on a Tipton memorial.

Sidney Riley enlisted with the Rifle Brigade at the Town Hall, West Bromwich on 5th September 1914. This was almost certainly with his pal George Mills as they were both members of the Tipton Adult School, and had consecutive army numbers. Sidney was 21 years and 189 days old, having been born in February 1893 in Walsall.

Sidney was 5 feet 5½ inches tall with a 35-inch chest, and weighed 114 pounds. He had grey eyes, black hair, a fair complexion, and tattoo marks on his left arm. His stated his religion as Church of England, and he was employed as a Brass Worker.

Sidney lived at 5 Eagle Square, New Road, Tipton with his wife Lavinia May Riley. They had married on 29th March 1914 at St. Martin's Church, Tipton. His parents, John and Mary Elizabeth, lived nearby at 2 Eagle Square. Sidney’s brother-in-law, Ernest Webb, was also killed in action; Ernest and his wife, Agnes Elizabeth – Sidney’s sister, were living at 7 Eagle Square.

During his training, Sidney was posted to the 10th Battalion, Rifle Brigade on 20th September 1914, and then to the 12th Battalion (12/RB) on 1st October 1914. Sidney was appointed Acting Corporal on 24th April 1915. With training complete, Sidney left Larkhill Camp on the 21st July 1915 and embarked at Southampton on S.S. Viper. He arrived at Le Havre on the next day, and then at Hazebrouck, Belgium on 29th July 1915.

On 27th August 1915 Sidney was admitted to 61st Field Ambulance suffering from Scabies. He was admitted to No.7 Casualty Clearing Station on the same day. A week later he was discharged to duty.

On 25th September 1915, 12/RB lost about 65% of their NCOs (killed or wounded) in an attack near Laventie. Four days later, Sidney was promoted to Corporal.

On 31st May 1916, 12/RB moved into trenches in the vicinity of Ypres. Between 1st and 8th June, Captain Rae and 31 Other Ranks were killed, and 1 Officer and 61 Other Ranks were wounded. One of those wounded was Sidney Riley.

On 7th June 1916 Sidney was admitted to the 61st Field Ambulance with a ‘Gun Shot Wound’, and on the same day to No.20 Reception Station. About 8 weeks later, on 3rd August, he was admitted to No.11 Casualty Clearing Station, and 2 days later to No.39 General Hospital.

Sidney re-joined his battalion, near Trones Wood on the Somme on 27th September 1916, about 12 weeks after he had been wounded.

Just 10 days later, on 7th October 1916, 12/RB carried out an attack on Rainbow Trench at Montauban. The attack was successful and the objectives were taken, but 5 Officers and 31 Other Ranks were killed, and 3 Officers and 193 Other Ranks wounded.

Sidney was once again wounded, with a ‘Gun Shot Wound’ to his right shoulder. He was invalided back to England on 13th October on the Hospital Ship 'Cambria' for treatment and recovery. Almost 2 months later, on 9th December, he was posted to the 6th Battalion who were part of the Thames and Medway Garrison, on home duties.

After Sidney's death, his outstanding army pay and allowances amounted to £1/8/8d (1 pound, 8 shillings and 8 pence); this was paid to his widow, Lavinia M., in April 1918. His War Gratuity was £17/0/0d (17 pounds exactly), this was also paid to his widow in November 1919. The value of the War Gratuity suggests that Sidney had enlisted in September 1914.

The second phase of the 3rd Battle of Ypres was the Battle of Langemarck on 16th August 1917. The 12th Rifle Brigade (part of 59th Brigade in 20th Division) were in brigade reserve for the initial attack, commencing at 04.45hrs. The attack, through Langemarck to the 3rd objective at Eagle Trench, was successful but was compromised by the 11th Division on their right being unsuccessful, leaving the 20th Division's flank exposed.

A German division was spotted at 8.00am forming up near Poelcapelle, and about mid-morning 'A' company which included Sidney Riley, was ordered to advance to support the 6th Ox & Bucks just west of Langemarck. Between 12.00 and 3pm there was heavy shelling causing 30 casualties to 'A' company.

At about 8pm there was some confusion about the 6th KSLI pulling back. 'A' company (Riley's company if he was still alive) was ordered to advance through Langemarck to ensure the safety of the advance, they dug in and stayed there overnight. At some stage during this day Sidney Riley was killed and his body lost, he is commemorated on the Tyne Cot Memorial.

It was not possible to hold Eagle Trench, and it was 2 weeks before it was taken and held. 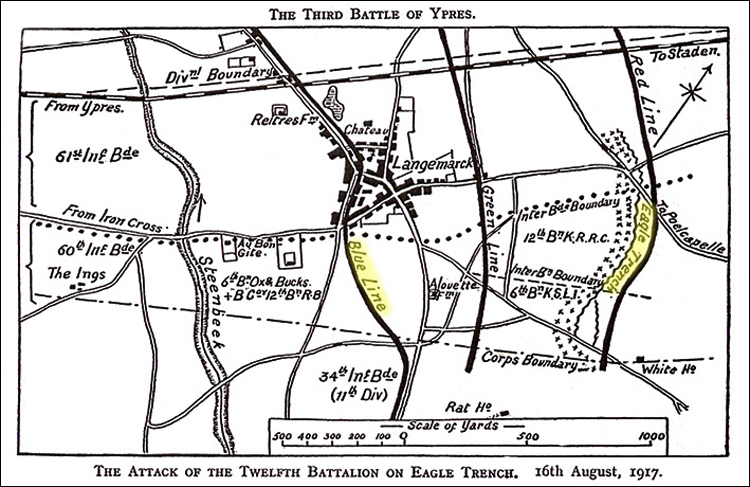