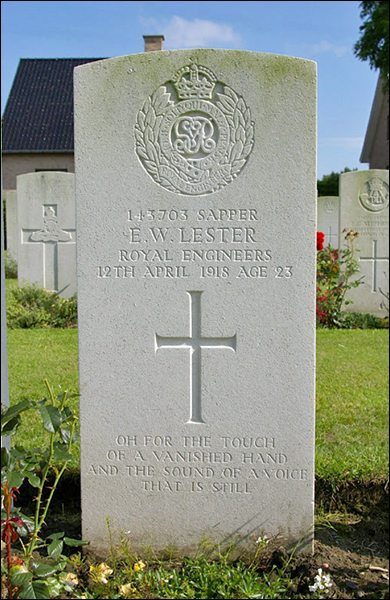 Not commemorated on any Tipton memorial.
Commemorated here because identified as Tipton on 'Soldiers Died in the Great War'.

The 141st Army Troops Company were a unit of Royal Engineers, held at Army level, providing heavy equipment and performing tasks that were beyond the capability of the Divisional Field Companies. They normally undertook more technical tasks such as building water-piping systems or the heavier type of bridges.

As the 141st A.T. Company were controlled at an 'Army' level, they were allocated tasks over a wider area as they were needed. It is therefore difficult to identify the area in which Sapper Lester was working when he was wounded. He is buried in Duhallow Advanced Dressing Station, which is about a mile to the north of Ypres, on the west bank of the Ypres canal.

Tipton Herald May 4th 1918
THANKS.
Mr and Mrs Lester (father and mother) of the Co-operative Stores, Dudley Port, and Mrs Elsie Lester (wife) wish to return thanks for the sympathy expressed on the death of Private Ernest Lester, R.E., who has been killed in action.