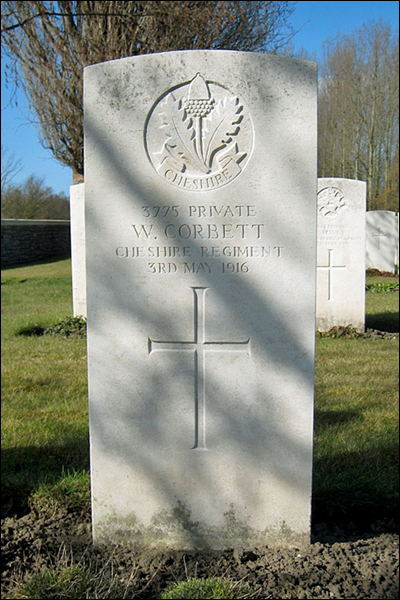 "Soldiers Died in the Great War" records that William was born in Tipon, hence his entry on this Tipton web-site. Both the 1901 and 1911 Census Returns show him born Bradley/Bilston. By the age of 3, the family had moved to Stalybridge where they still lived at the time of William's death.

After William's death, his outstanding army pay and allowances amounted to £5/11/3d (5 pounds, 11 shillings and 3 pence); this was paid to his father and Sole Legatee, William, in August 1916. His War Gratuity was £5/0/0d (5 pounds exactly), this was also paid to his father in September 1919. The value of the War Gratuity suggests that William had enlisted in approximately January 1915.

William's father, also William, was granted a Pension of 5/0d (5 shillings) per week from 2nd January 1917 to 2nd January 1918; there is no indication if this ceased at that date or was continued. William senior's address at that time was 15 Quay Street, Stalybridge.

From: The 6th Battalion the Cheshire Regiment in the Great War by John Hartley.
During the early evening of 1 May (1916) the Battalion went into the trenches just south of the hamlet of Givenchy-lès-la-Bassée. They included a hundred men who, that day, had been transferred from the 9th Entrenching Battalion. Seven platoons occupied the firing line, with one held in reserve at Givenchy itself. Their right flank was on the north bank of the La Bassée canal. The platoon on that flank was some 250 yards away from the Germans, but No Man’s Land gradually narrowed, so the left-hand platoon was only thirty yards away – within grenade throwing range. The trenches were in a generally good state of repair, except on their left, where there had been much damage by explosions from German mines. Intelligence reports suggested that the Germans were from Saxony.

“The square heads were pleased to meet us and sent whizz bangs, rifle grenades and a new projectile I have not seen before, ‘Rum Jars’ (Editor: a type of trench mortar). But we soon quietened him down with a speedy return.” (George Dickinson).

James Boardman found the narrow trenches particularly difficult.
“This made our work as stretcher bearers very hard, and as casualties were more frequent our hands and elbows were badly bruised in getting men away. We are only a few yards from the Germans. Only this morning one of the enemy shouted ‘Chuck us a tin of jam over, Tommy!’ One of our chaps looking over was shot through the eye.” (James Boardman).

The dead man was Private William Corbett, a nineteen-year-old from Stalybridge. He worked as a nail maker at Summers Ironworks before enlisting in January 1915. The young soldier had only arrived in France on 12 March (1916).