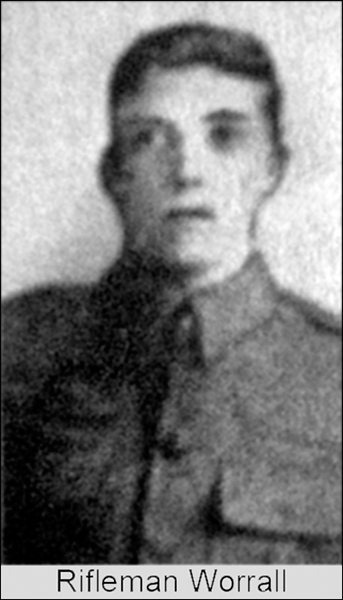 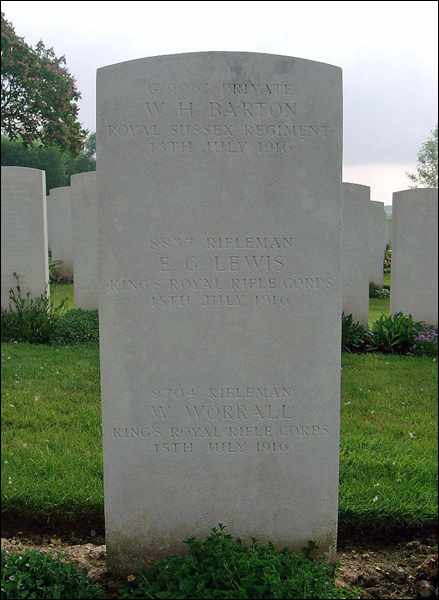 Not commemorated on any Tipton memorial.
Commemorated here because identified as Tipton on 'Soldiers Died in the Great War'.

By 1911 the family were living at 65 Ethel Street, Smethwick, but Walter had joined the Army and was stationed in Gosport.

The 2nd King's Royal Rifle Corps, as part of 1st Division, were involved in the Battle of Bazentin Ridge from the 14th July. It is likely that Walter received his wounds on the 14th or 15th during this conflict, and died on the 15th at one of the Casualty Clearing Stations at Heilly, and is buried at Heilly Station Cemetery.

Smethwick Telephone Newspaper.
Mrs Worrall, 107 Gladys Road, Bearwood, has been notified that her son, Rifleman Walter Worrall, has died from wounds received in action. He had served several years in the Army having enlisted in the King's Royal Rifle Corps. He was 24 years of age.
A brother of Rifleman Worrall was killed last year. There is great sympathy for the mother, Mrs Worrall, who has just sustained a third bereavement on the death of her husband.
(Note: The brother was Hugh Francis Worrall, 2nd South Staffs, killed in action 24th November 1915, born & resident Smethwick)