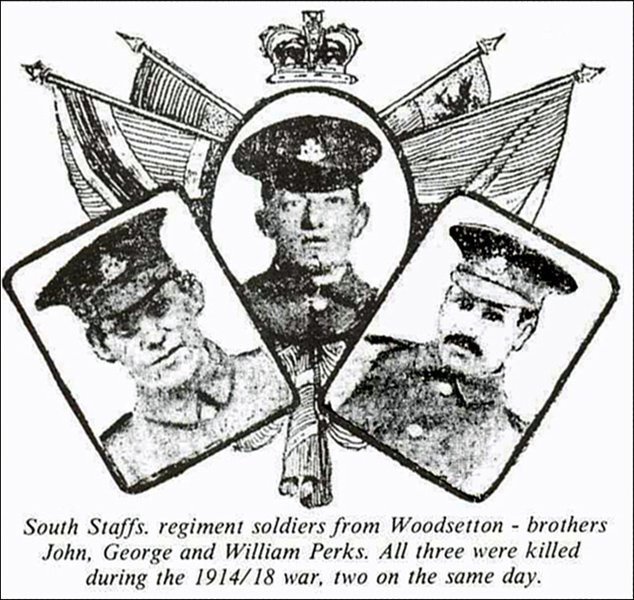 From article in the Black Country Bugle December 1997.

The surname Perks is also spelt as Perkes at various times for the 3 brothers. Perks is used here for consistency.

William Perks wrote to his parents that George had been shot through the head whilst at his side. He carried George to the Red Cross and returned to the front line, George lived for a further four hours. Before he reached the front again William was told that his youngest brother Jack (John) had been killed. William was also to lose his life, on 28th April 1917 during the Battle of Arras serving with the 2nd battalion, South Staffs, and also has no known grave.

28/4/17 FARBUS-POINT DU JOUR LINE
Zero time fixed for 4.25 a.m. and Z day 28th. The 5th & 6th Brigades reached their 1st & 2nd objectives but were obliged to retire to the original positions owing to the Division on right (63rd) failing to reach its objectives. The British front was subjected to heavy and ceaseless fire all through the day. Our casualties were - Capt. W.A. SIMMONDS, 2/Lts. H. JOHNSON AND J.S. SMITH killed, Lt. T.H. SEARLES wounded, 2/Lts. C.W. BLOOMFIELD & R.S. O'CONNOR missing, and 186 other ranks killed, wounded and missing.


The following detail is from the excellent book "When the Whistle Blows" by Riddoch and Kemp on Sportsman's Battalion - the 17th Middlesex.
The Battle of Arras (1st Battle of the Scarpe) commenced on 9th April 1917, acting as a northern distraction to the Nivelle Offensive on the Aisne which was intended as a major French breakthrough. The British attack brought numerous successes including the capture of Vimy Ridge and the village of Monchy. By 15th April the advance had slowed, and Haig ordered a temporary halt so preparations could be made for the next series of attacks.
The objective for 1st Army (which included the 2nd South Staffs) for the 2nd Battle of the Scarpe (23rd -24th April) was simply the capture of Gavrelle. This was achieved and German counter-attacks were re-buffed, the line held and gains of 1 to 2 miles were made. Haig made plans for a major attack in May to encourage the French to continue their Aisne offensive. As a preliminary to this, an attack on 28th April was intended to get an improved starting line for May - the 2nd Division objective (which included the 2nd South Staffs) was the village of Oppy.
The attack by 6th Brigade of 2nd Division was to be carried out by 17th Middlesex and 13th Essex with 2nd South Staffs in close support, with 'C' & 'D' Companies of 2nd South Staffs acting as support for 17th Middlesex for carrying parties and mopping-up duties.
17th Middlesex were to take 3 successive objectives, following a creeping barrage. At each objective, the leading troops were to consolidate whilst the next wave of troops passed on to the next. The 1st objective was achieved without undue casualties, but the advance to the 2nd objective was held up by German resistance and units either side not advancing as quickly. The creeping barrage moved away faster than the 17th Middlesex could manage and local German counter-attacks ensued.
The Germans managed to drive between the 17th Middlesex and the 2nd Highland Light Infantry to their left, and to attack the 17th Middlesex (especially 'A' Company) from the flank and rear. The "moppers-up" - the 2nd South Staffs - had already been sent forward to strengthen the flanks, but in effect the 17th Middlesex were surrounded. The day had been disastrous for the 17th Middlesex and the companies of the 2nd South Staffs allocated to them. This attack was to be one element of what was to become known as the Battle of Arleux.

62 Other Ranks from the 2nd South Staffs were killed on 28th April, 5 of them from Tipton: Ernest Allen, Robert Jones, Frederick Mantle, William Perks and William Williams. All 5 Tipton men are commemorated on the Arras Memorial.

Tipton Herald 11th September 1915
AT THE DARDANELLES.
THE 7th SOUTH STAFFORD HEROES.
TWO BROTHERS KILLED ON THE SAME DAY.
There can be no doubt that the 7th South Staffs Battalion (Lord Kitchener's Army) suffered heavily in the tremendous battle at the end of the first week of August. Official notices of scores of deaths of our brave local lads in that wonderful conflict have been received by the relatives during the past few days.
In one case two brothers were killed on the same day, and it is noteworthy that together with a third brother who was in the same battle, they had enlisted on the same day. They are the sons of Mr and Mrs Perkes of 65 Regent Street, Swan Village, Woodsetton, Coseley.
Their two sons who are killed are George Perkes, aged 28 (married), who resided with his wife in Canal Street, Tipton. He was employed as a collier at the Park Lane Pits up to the outbreak of war. The other brother, who worked at the same colliery, is John Perkes (single), aged 22, who lived with his parents, and was the mainstay of the home. The father is quite unable to work, being an absolute invalid from chronic asthma.
Both brave young heroes threw up their work and joined the 7th South Staffordshire Battalion, together with an older brother, on November 4th last. All three were in the same battalion, and left England about a couple of months ago. The youngest had sent many postcards home to his mother while he had been training in England, and these mementoes are much treasured by her.
The eldest son of the family, William Perkes, is 35 years of age, and before the war was employed at one of Mr Barker's coal pits.
The official notification of the deaths of the two soldiers was received by the parents in the one case, and by the wife in respect of George Perkes on Sunday last, 6th inst., and on the following morning the parents received a letter from the eldest son, Private William Perkes, who was in the same battle.
DEAD SOLDIER BURIED BY BROTHER.
In this letter he tells his parents that his two brothers, Jack and George, were killed on August 9th. He describes in simple style how he carried his brother George back, they having been by the side of each other when his brother was shot through the head. He carried him to the Red Cross and leaving him there, returned to the firing line. Before he had reached the front again he ascertained that Jack (the youngest brother) had been killed. He had been unable at the time of writing to recover his body, but he explains that it fell to his lot to bury his brother George. He adds: "I shall bury Jack if I live."
The married brother leaves a widow and two little children at Canal Street. The children are a girl aged 4, and a boy of 2 years.
A private letter to the wife tells her that her husband (George) who was carried to the ambulance by his elder brother, William, lived four hours after his brother John.
The parents of John and George also received a letter from a companion, who is wounded in a hospital in Port Said, telling them of the death of their son George.

Tipton Herald 20th November 1915
A MESSAGE FROM THE FRONT.
Private W. Perks of the 7th South Staffs, had two brothers killed in the same big battle at the Dardanelles, and he had the melancholy duty of burying one of them. His home is in New Cross Street, and he sends "a message from the front to the boys at Tipton." In expressing his thanks for the receipt of a parcel, he says that he is pleased to know that the people in the old town are thinking of the soldier boys.
He believes there many young and able-bodied young fellow in Tipton "who could take a little of the burden off our shoulders if they could only see what we are doing this side of the water. If they want the war to come to an end, now is the time to show us they are not cowards. I hope we shall soon have news of another recruiting boom in Tipton, for nobly as Tipton has responded there must be no slacking until peace is declared." He adds that one of the most popular songs at the front is "Come along boys, and join Kitchener's Army."

Tipton Herald 27th November 1915
TIPTON SOLDIER'S POETIC CALL.
Private W. Perks, whose parents reside at Regent Street, Woodsetton, was with the Expeditionary Force in the Dardanelles, and took part in the famous charge in which the 7th South Staffs Battalion suffered heavy casualties. In the battle, his two brothers in the same battalion, were both killed, and for one of them he was able to perform the last sad office of burial. He is married, and his wife lives in New Cross Street. He has enclosed in a letter to his parents "a bit of poetry", which although somewhat crude in parts, is original, and affords an illustration of how cheerful the average Tommy can be even under the most adverse circumstances. It comes, too, at an opportune time, seeing that Lord Derby, and those associated with him, are appealing to "the young chaps in England" to respond to the call of duty, and so preserve the voluntary system, which for so many years has served the country's needs. The lines were written in a military hospital, in Cairo.

Oft in my trench I think of the poor chaps left at home,
And enemies surrounding them where'er they chose to roam.
The tram and train collisions and the rattling motor bus,
And water in the cow's milk, and Zepp raids which are "wuss."
How awful it must be at night to sleep on a feather bed,
And find for breakfast daily, there's butter on your bread.
With all these shocking worries a man's life must be sad,
And to think I'm missing these it makes me feel so glad.
Out here things are quite different, life is so grand and free,
We don't have butter on our bread, or cow's milk in our tea.
We have no furs, or eiderdowns, or feather beds at night;
Zepps never trouble us, but keep well out of sight.
The only things that bother us are bullets, bombs and shells,
Bully beef and biscuits, and nasty, horrid smells.
So to you young chaps in England I send my sympathy,
And advise them for their safety to come out here with me.