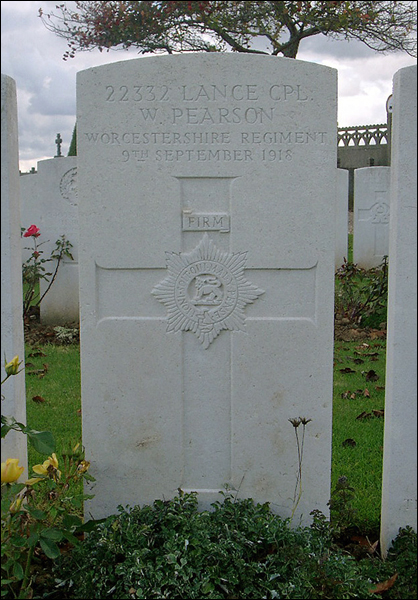 Commemorated on the Tipton Library, St. Matthew's, and St. John's memorials.
Commemorated here because he appears on a Tipton memorial.

Too many options exist for William Pearson on the 1911 Census, so cannot identify him without further detail.

On the 1911 Census there is a Private William Pearson age 19, born Tipton, in the 3rd Battalion Worcestershire Regiment at Shaft Barracks, Western Heights, Dover. There is no indication if this is him, but as this casualty entered France in September 1915 I doubt it is him.

The name W Pearson is commemorated on the Tipton Library, St. John's and St. Matthew's memorials, it is not possible to identify which one is which!

After William's death, his outstanding army pay and allowances amounted to £13/6/2d (13 pounds, 6 shillings and 2 pence); this was paid to his widow, Alice M., in December 1918. His War Gratuity was £15/0/0d (15 pounds exactly), this was also paid to his widow in December 1919. The value of the War Gratuity suggests that William had enlisted in approximately June 1915.

William Pearson died on wounds on 9th September 1918 after being treated at 54th Casualty Clearing Station at Aire, he was buried in Aire Communal Cemetery. We cannot be sure when William received the wounds which led to his death, but statistically it was likely to have been between the 3rd and 5th September near Estaires, which is about 12 miles east of Aire.

The bridge just to the south of Estaires, the Meuse Bridge, was passable and with no great opposition. To the east of the town a German military bridge had not been completely destroyed, and overnight the Worcesters with the Royal Engineers managed to made the bridge passable.

At 6.00am, the 2/8th Worcesters gained both bridges. ‘C’ & ‘D’ Companies crossed the Meuse Bridge and headed east to meet ‘A’ & ‘B’ Companies who had crossed the patched-up German military bridge.

By the end of the day (September 3rd) the Worcesters had advanced about a mile and overnight held the line of the railway near Laventie.

The advance continued on September 4th with the Worcesters taking Laventie which was a further ½ mile. German resistance was relatively light except that the left flank was held up for the rest of the day by the strongly-defended Barlette Farm.

Barlette Farm still resisted on September 5th and the Worcesters made little more headway here. The battalion was relieved that night.

The Passage of the Lys had been achieved with the loss of 10 Other Ranks killed in action, and 1 Officer and 55 Other Ranks wounded. William Pearson was likely one of those wounded in this fine action.