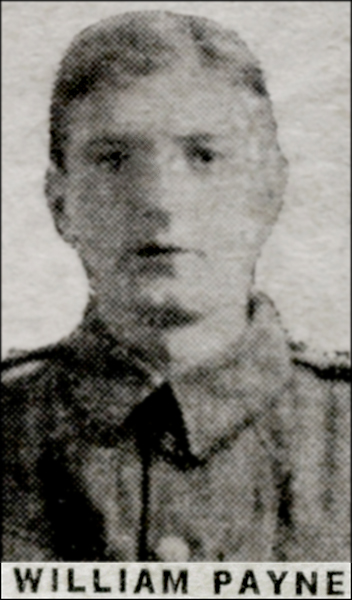 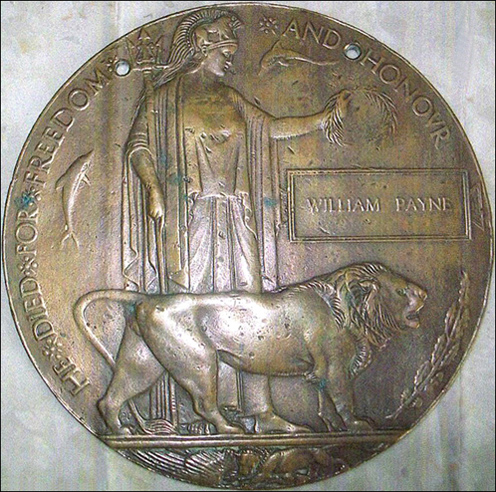 Apologies, I have lost the name of the person who sent me the photos. Contact me for an acknowledgement here.

Commemorated on the Tipton Library Memorial.
Commemorated here because he appears on a Tipton memorial.

William attested on 12th April 1915 in Tipton, his home address was given as 64 Coppice Street, Tipton. He was a 29 year-old married man, and he was employed as a miner. He was 5 feet 6¼ inches tall, weighed 140 pounds with a 37-inch chest and good physical development.

William was initially posted to the 5th Battalion King's Royal Rifle Corps (KRRC) for training in Sheerness, and posted to 'B' Company of the 7th Battalion KRRC (14th Division) when first landing in France on 5th August 1915. The 14th Division were located in the Ypres Salient, and William would have seen action on 25th September when the 14th Division were involved in the Second attack on Bellewaarde Ridge; this was a feint attack as the Battle of Loos started on the same day. By the end of the day, no progress had been made on the Bellewaarde Ridge.

In December 1915, William returned to the UK suffering from rheumatism in his shoulders and back. He stayed at the Graylingham War Hospital in Chichester from 16th December to the 16th January 1916, although he was granted furlough from the 2nd to 11th January. During this time he was posted to the Depot Battalion, but posted to the 5th Battalion from 10th March presumably to regain fitness for his return to active duty.

During his time back in England, there were three instances of overstaying his pass in February, March and May 1916, presumably being at home with his family. William embarked from Southampton for the last time on 14th June 1916 landing in Rouen on the next day, and joined the 1st Battalion KRRC (2nd Division) on the 30th June 1916.

In mid July the 2nd Division moved south from the Vimy Ridge area to the Somme where they were engaged in the ongoing Battle of Delville Wood. They were in action on the 27th July when they cleared a large part of the southern area of the wood; Sgt Albert Gill of the 1st KRRC won the Victoria Cross on that day. The 2nd Division held the wood until 4th August when they were relieved. It was September before Delville Wood was completely in Allied control.

On the 4th August, the day his Division was being relieved from the front line, William Payne was killed in action. He has no known grave and is commemorated on the Thiepval Memorial to the Missing of the Somme.

Tipton Herald 26 August 1916
ANOTHER TIPTON HERO
The official intelligence has come to hand of the death in action on August 4th of Private William Payne, age 29, of the King's Royal Rifles, whose home was at 64 Coppice Street, Tipton. He leaves a widow and three children aged respectively 4,9 and 11, to mourn his loss. He was formerly a miner employed by Messrs. Barker at Schoolfield Colliery. He joined the Army in April 1915, and then the employers tried to get him back. He left England for France on August 4th and he was killed in action almost one year later. His widow first heard of his death on Saturday August 12th, and the widow had the official news on the 17th. He was taken ill just before last Christmas with rheumatic fever, and was home for a fortnight after being ill for three to four months. His wife went to the coast last Whitsun to see her husband off. The deceased, who belonged to Dudley, was well-known both there and in Tipton.
The widow received the following letter from her husband just a day of two after he was killed:- "I am just writing these few lines to you hoping to find you quite well as it leaves me, thank God, as we came out of a big battle on Thursday, we lost pretty bad, but the Germans lost 3 to 1. We went at them like tigers and they were like big lions, but we gave them socks. The general is very pleased with us. Dear wife, I had your photo and it was taken very well and the children looked nice. I had it the day we went into action."
The deceased soldier joined at the same time as a friend, William Jordan, also of Coppice Street. A brother of the deceased is a member of the R.F.A., the parents are both dead.