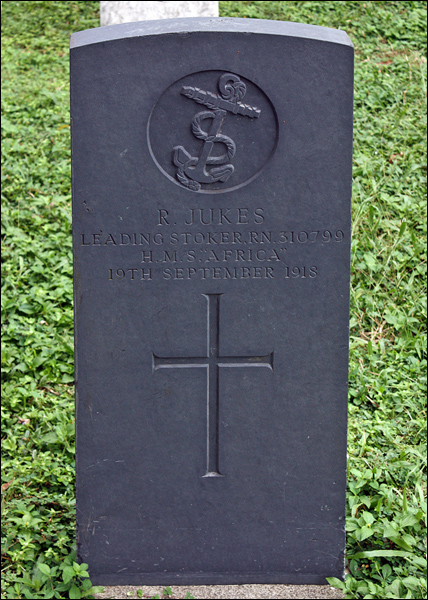 Not commemorated on any Tipton memorial.
Commemorated here because his name was found on the Navy List.

Richard Jukes was a pre-war Navy man, already serving by 1911. His record was found on the Navy List on Ancestry.co.uk stating that he was born 10th August 1888 at Tipton, and died from disease 9th September 1918 whilst serving on H.M.S. Africa. His wife (widow) was Minnie Jukes of 9 College Road, Deal, Kent.

In March 1917, H.M.S. Africa was attached to the 9th Cruiser Squadron for service in the Atlantic Patrol and for convoy escort duties. She was based mainly at Sierra Leone and escorted convoys between Sierra Leone and Cape Town, South Africa.

Freetown, Sierra Leone was major coaling centre for ships of the Royal Navy. In August 1918, H.M.S. Mantua had docked at the port to refuel, at which time it was carrying approximately 200 people infected with influenza, who passed the virulent infection on to workers at the port. When H.M.S. Africa arrived at Freetown, the virus was then passed from the port workers to the crew with devastating results. At the time of Richard Jukes' death, almost 600 of the 779 ships compliment of H.M.S. Africa had been struck down by influenza. One officer and 49 Other Ranks died during this influenza outbreak and are buried in King Tom Cemetery, Freetown.